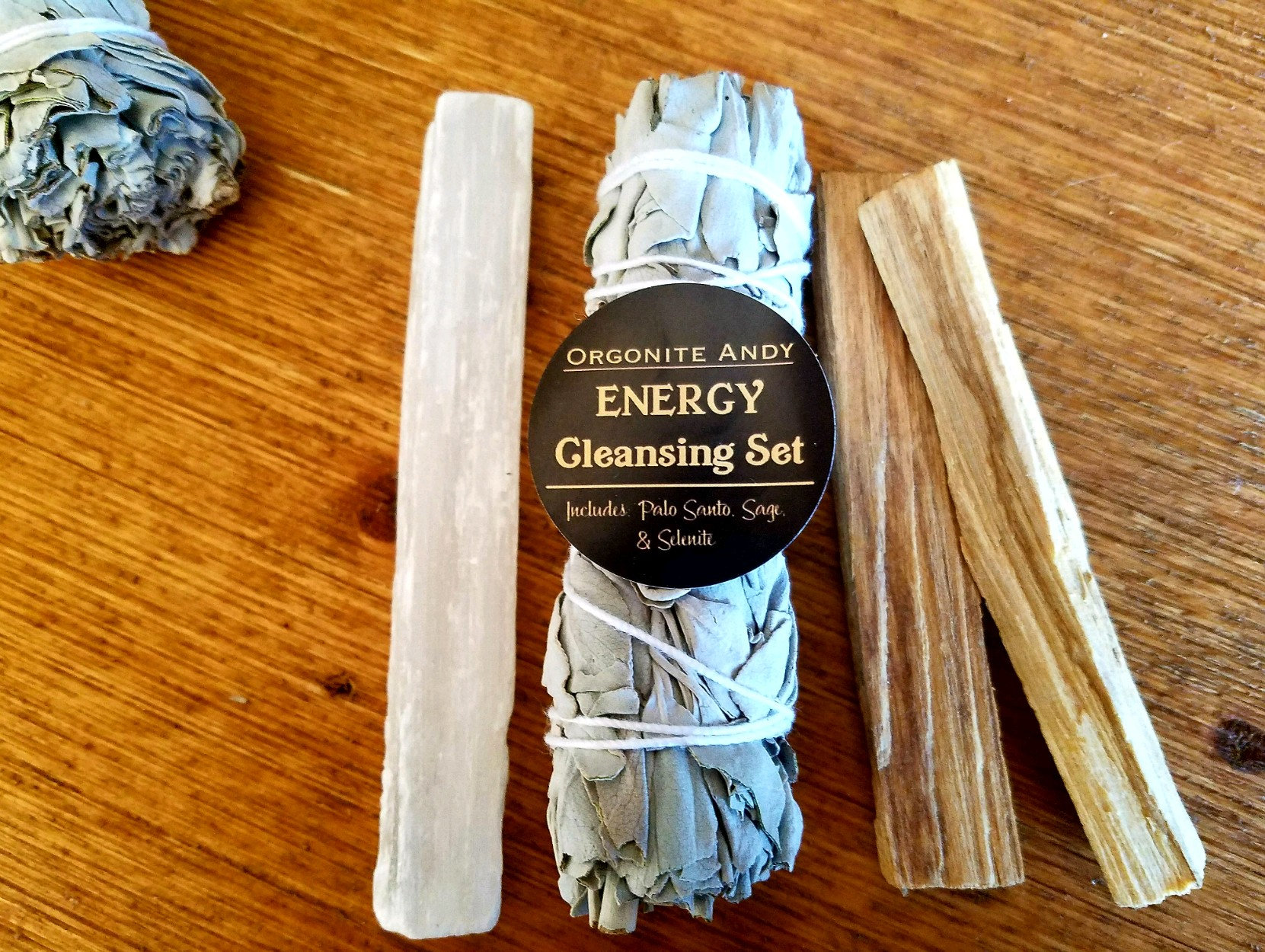 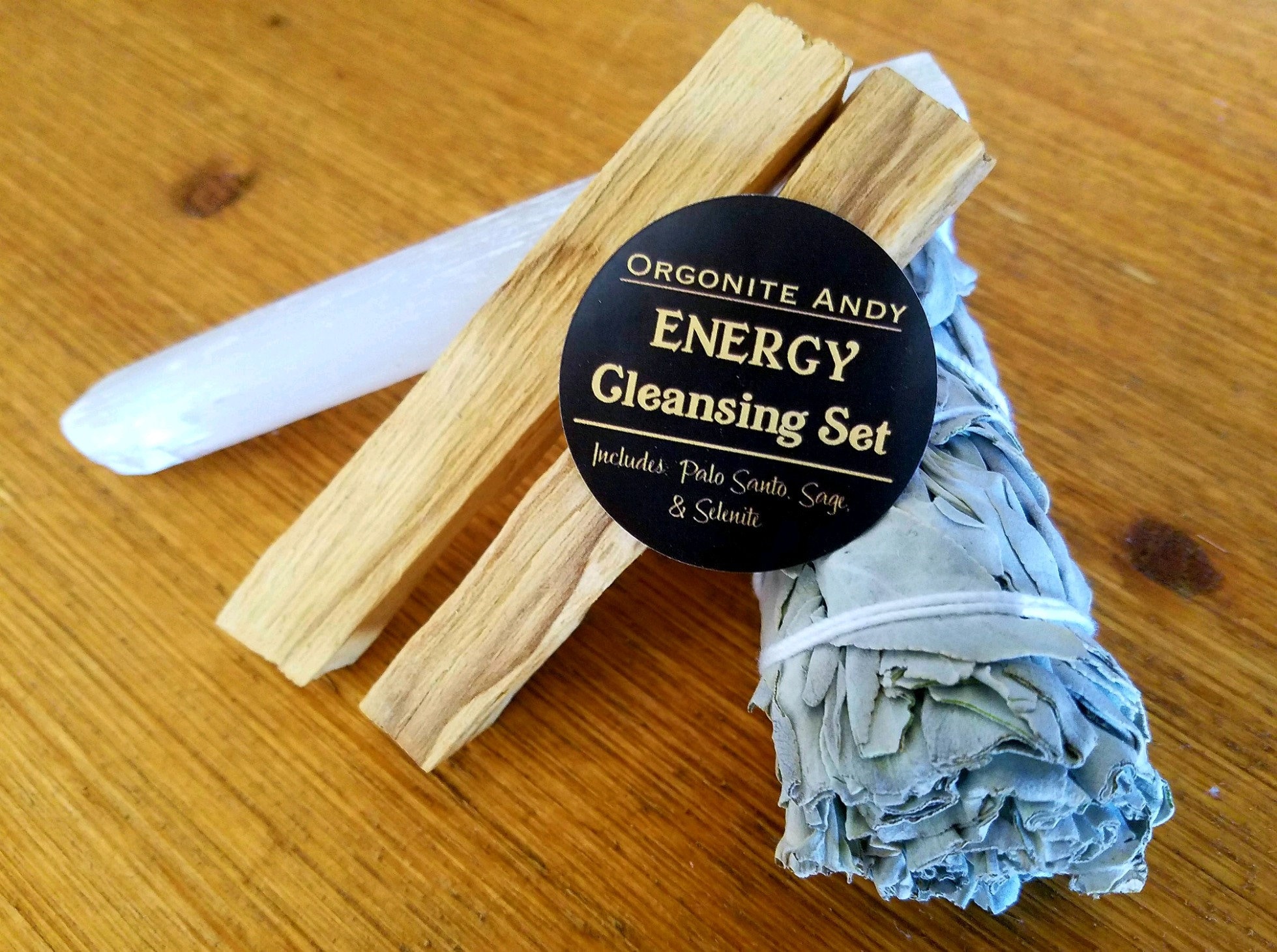 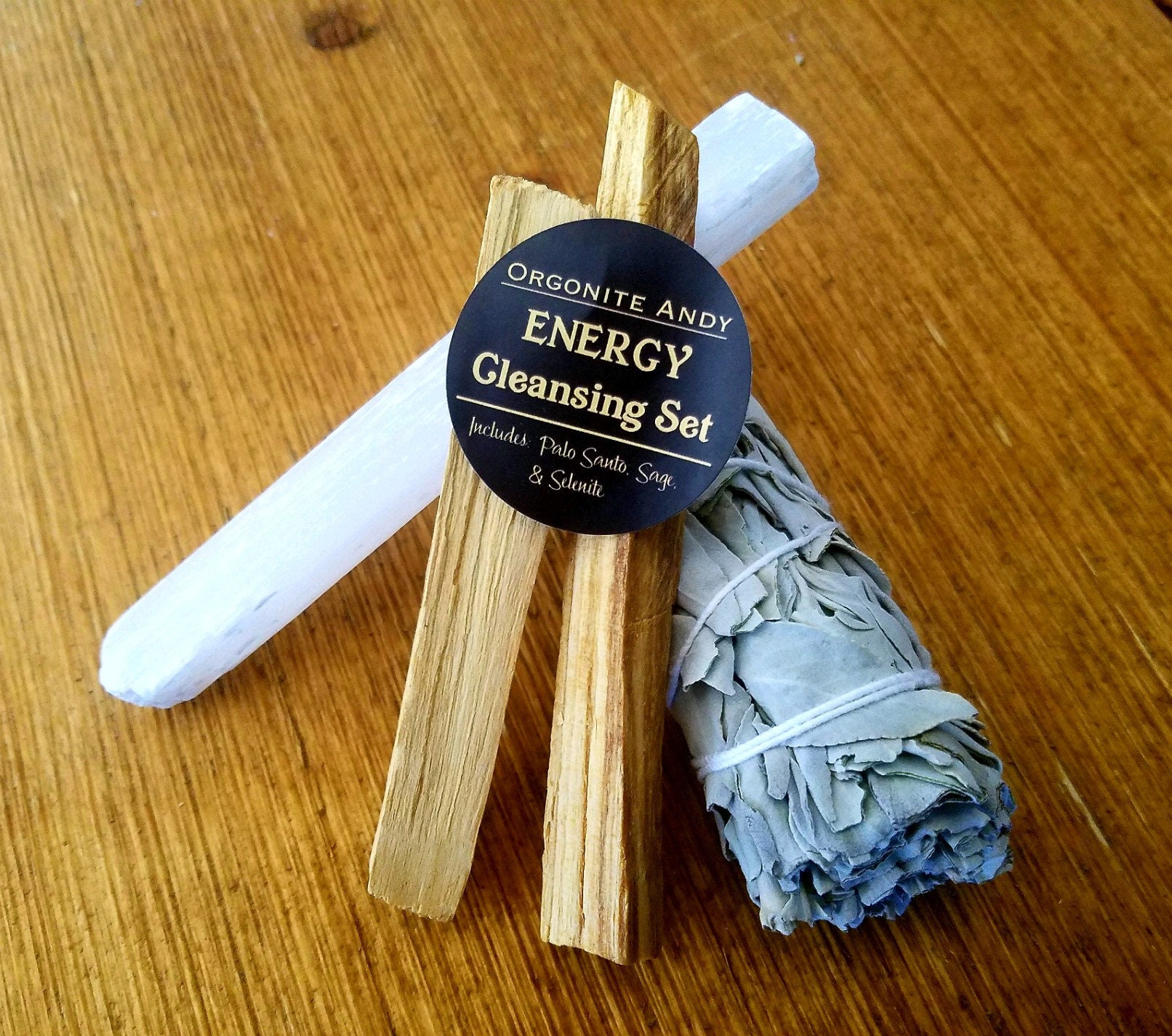 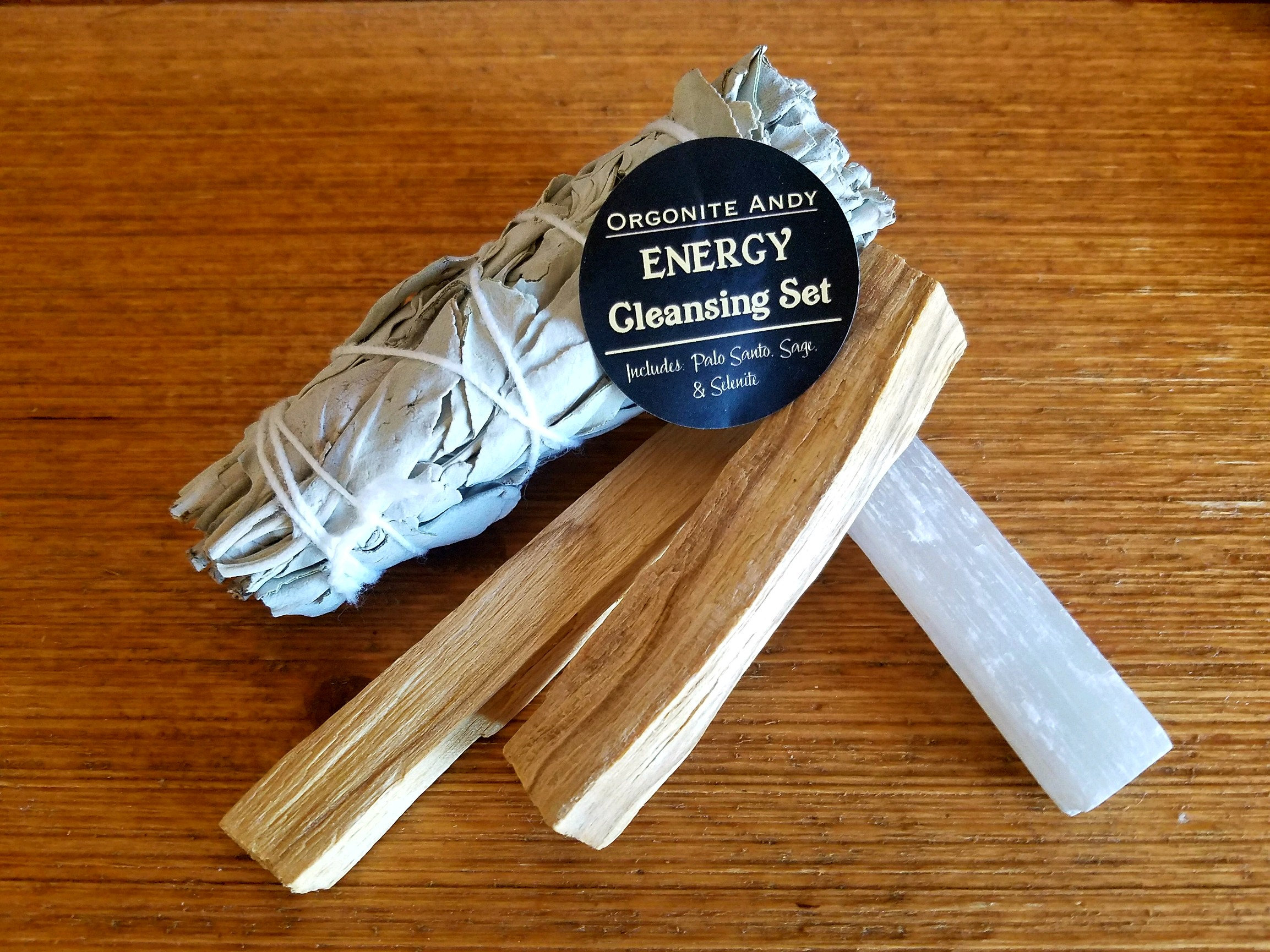 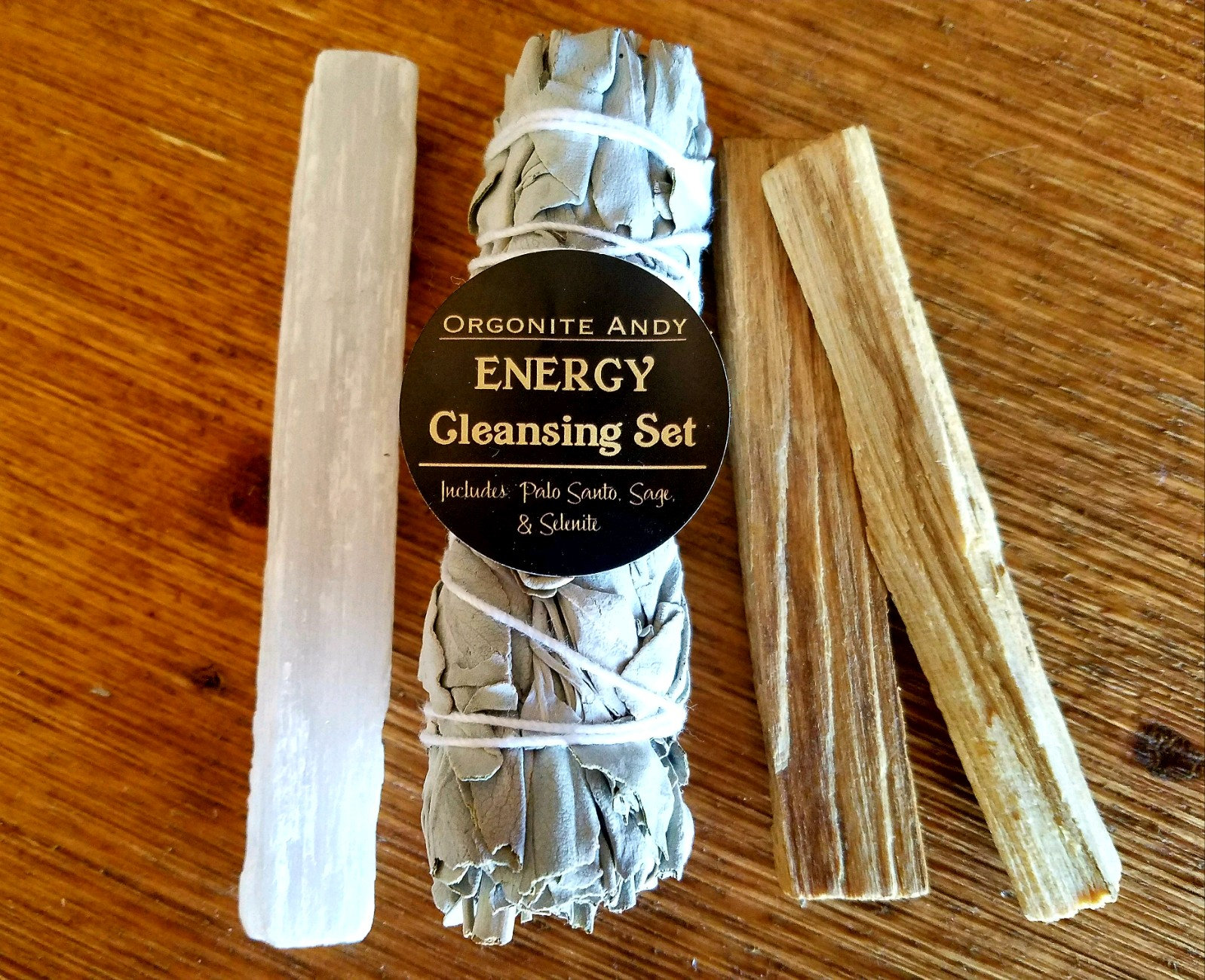 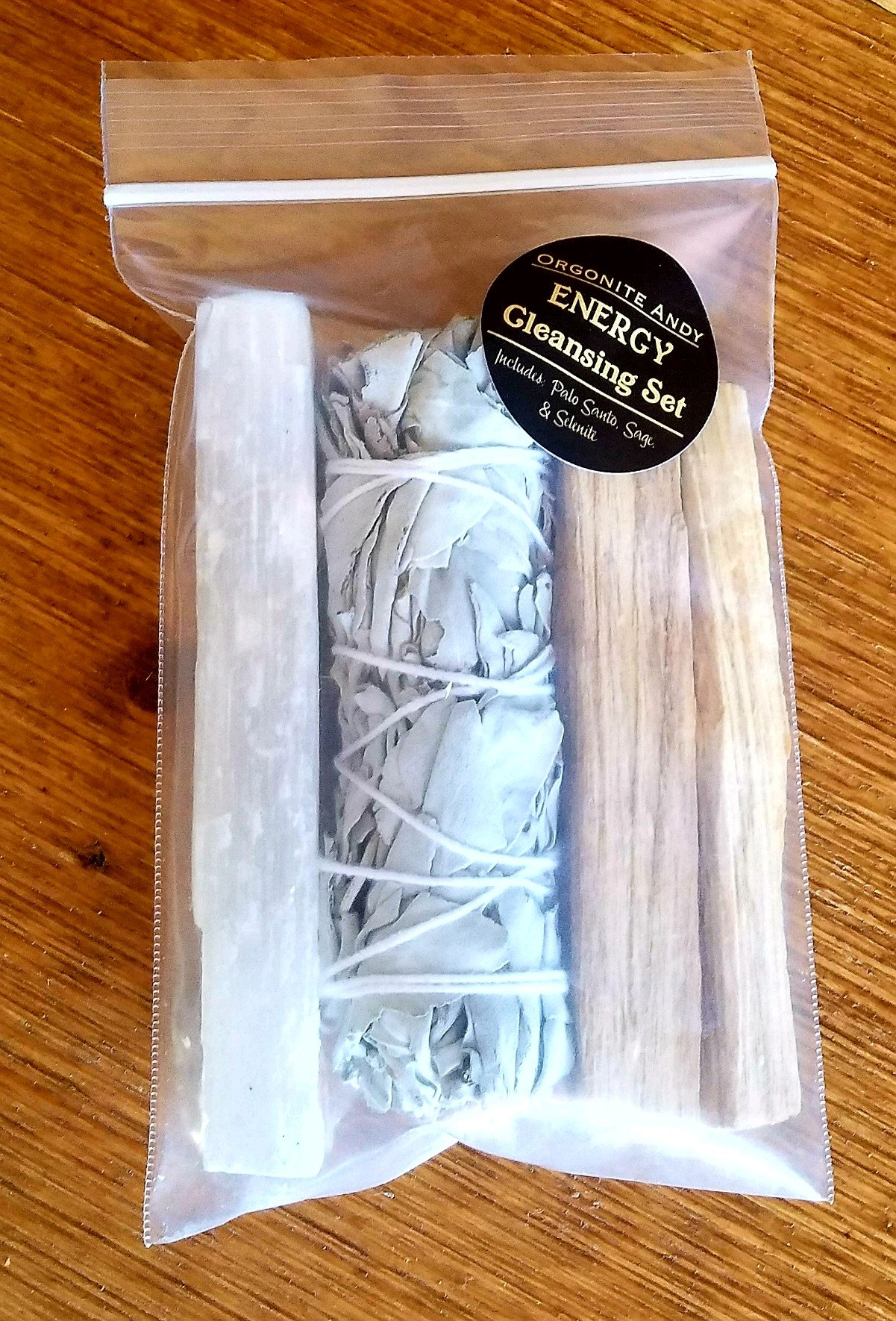 Andy's Energy Cleaning Set includes a California White Sage Bundle, Two Palo Wood Sticks & a naturally formed Selenite Crystal Wand. This smudge kit resonates positive vibrations. It is a natural way to purge negative influences from your surroundings, restore a harmonious atmosphere and refresh the air. Utilizing Andy’s Energy Set in your home or office is like taking an energetic shower, or perhaps even spending a day in the mountains breathing in the fresh air and scent of pine, offering a direct positive effect on reducing stress levels with an aromatic atmosphere.
___________________________________________________________
THIS SET INCLUDES

The burring of sage Is one of the oldest and purest methods of cleansing and once used as an ancient medicine for most diseases. The word sage stems from the Latin word salvia, which translates to “healthy” or “to heal.” The benefits sage can be harnessed very simply by burning sage in your home, office or any other place in need of cleansing. Recent studies have shown that there is scientific evidence that this medicinal smoke is a powerful antiseptic that can purify the air of 94% of harmful bacteria for up to 24 hours. Burning sage neutralizes the positive charge and releases large amounts of negative ions into the atmosphere. Sage is powerful bringing positive vibrations and is a very efficient way to clean the energy in your environment. It has been known, when burned, to increase wisdom, clarity and increase spiritual awareness and likely why we refer to wise people as “sagely”.

Palo wood is a sacred wood that is native to the coast of South America and is related to Frankincense, Myrrh and Copal. In Spanish palo wood means "holy wood" or wood of the saints. It is a strong medicine that has been popularized for its heavenly presence in keeping energies grounded and clear. This wood is enjoyed by many when it is burned, it emits energetically cleansing properties, medicinal benefits, and therapeutic healing power. It creates a pleasant, fresh smoke that smells similar to Sage and Cedar with a hint of Citrus and mint. This wood is a great energy cleanser for, your home, crystals, or jewelry.

I am so excited to use this kit! I am new to the energy world and am hopeful I’ll be able to bring positive energy to my home. I ordered from the best company I could find here on Etsy!

Perfectly packaged and exactly what was shown.